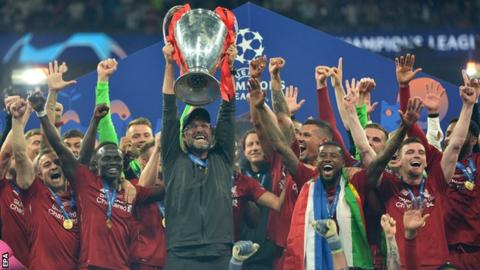 Current Champion League Champs, Liverpool FC with their manager Jurgen Klopp, celebrated a historic fifth championship last year (the tournament started in 1956).  This year they won the English Premiership (arguable the most competitive league in the world) with the following accomplishments, if they continue their dominance in the weeks ahead:

Their celebration affirmed their supremacy in the footballing (aka soccer) world.  What is the genius behind Klopp’s approach?  His trademark hugs to players when coming off the field, following a match and winning trophies go a long way in affirming what he values.  But there is something more going on here.

In a recent Men in Blazers interview with Klopp, he was asked what really matters.  His response was noteworthy – I summarize here.  At the end of our lives I don’t believe we will be asked how many trophies we’ve won; however, I do think it matters what we have done with what we were given.  Absolutely, every day I strive to make the most of every opportunity.  What matters for me is that my players have given their best every time they step on the field.

This is what Klopp is affirming.  The wins, trophies make a difference; but it is the mentality of “leaving everything on the field”, is what matters most.  And is one reason Liverpool FC is the dominate club in the world today!

Back in my seminary days (1985-1988) I distinctly remember a chapel service when a guest speaker, George Patterson, come in to share his methodology of disciplemaking.  The speaker was energetic and engaging – disarming in his presentation style.  Most of all – CHALLENGING “the win” for missionaries, church planters and pastors.

George Patterson was a missionary in Honduras where he discovered a radical (meaning “root” or “returning to the foundation of something) approach to disciplemaking and church multiplication.

George Patterson spent 21 years in Central America training pastors to make disciples in a New Testament fashion that rapidly multiplies churches. In Honduras he began by training pastors in a traditional, resident Bible Institute with poor results. With the advice of more experienced missionaries and much trial and error, he later saw churches multiply through the instrumentality of “Theological Education and Evangelism by Extension” (TEEE). This non-formal pastoral training resulted in about 100 new churches over twenty years in northern Honduras. This is as a result of the Biblical discipleship and church reproduction principles Dr. Patterson implemented. This model is now used with similar results in Asia, Africa and Latin America, as well in the United States, and is distributed as Train & Multiply TM. George’s teaching style relies heavily on student involvement in role-plays and exercises that bring learning to life. He is hilarious and hyper-energetic in the classroom.

George was “rewarding” or affirming disciples who were making disciples AND planting churches through their disciplemaking efforts.  It was inspiring and captivating.  Near the end he role modeled an exercise that involved students as he went through the 5-step disciplemaking/leadership development process:

I will never forget this principle.

Closer to home, we might “reward” behaviors or achievements in ministry: baptisms, budget and buildings.  Whatever those things are – we intentionally or unintentionally exalt or lift-up. Certain things recieve more air-time and attention, than others.

I remember the story a pastor shared, illustrating the importance he and the congregation at his previous church placed on Sunday morning worship attendance.  The pastor set a numerical goal for the year for new visitors to attend a worship service.  The morning of the final count the pastor realized he was 1 person short of their goal.  He explained how he went to the local gas station the morning of, and convinced an employee to join him and attend service that morning.  The employee did so and the congregation celebrated that accomplishment of the milestone together.

You might not reward Sunday morning worship attendance.  But you might take a look at how your people are demonstrating behaviors of a disciple.  Here is a short list of disciplemaking characteristics you might track:

Whatever that thing is, it is important for people to see what you and your church affirm, prioritize and reward.

5 questions to reflect on the “win” for your ministry